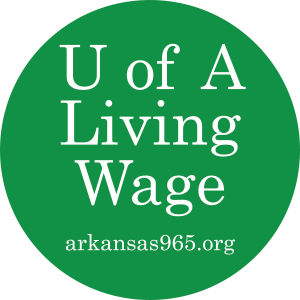 FAYETTEVILLE, Arkansas — A union local is staging a rally to support increased wages for lower-tier employees of the University of Arkansas.

Local 965 of the American Federation of State, County and Municipal Employees has announced a program for the U of A Living Wage Campaign for noon to 1 p.m., Saturday, April 7, on the plaza outside the Fayetteville Town Center. The union represents university staff and faculty as well as other governmental employees in the area.

“This is an effort to increase the wages of the lowest paid university employees. We applaud the efforts that Chancellor [Joseph] Steinmetz has made over the last year, but faster action is needed,” said Michael C. Pierce, an associate professor of history on the Fayetteville campus.

Local 965 is gathering signatures for a petition to present to Steinmetz, UA System President Donald Bobbitt and the system’s Board of Trustees. An online version of the petition can be signed at change.org.

It was on behalf of an AFSCME public workers strike that the Rev. Martin Luther King Jr. traveled to Memphis in 1968, where he was assassinated on April 4. The Living Wage rally also will address the 50th anniversary of King’s death.

“AFSCME Local 965 and the undersigned petitioners ask that you use the authority granted you by Amendment 33 of the constitution of the state of Arkansas to take immediate steps to ensure that:
“1. All University of Arkansas at Fayetteville employees, including students, are paid a living wage ($30,000 per year or $14.42 per hour)
“2. All University of Arkansas at Fayetteville graduate teaching and research assistants (50 percent appointments) are paid at least $15,000 per year
“3. All University of Arkansas at Fayetteville subcontractors pay their employees at least $14.42/hour
“The Local 965 and undersigned petitioners believe these increases in wages will help correct the longstanding, unjustifiable inequities among university employees and alleviate near-poverty conditions among a staff that is essential to the functioning of the flagship of the University of Arkansas system. These overdue pay raises will reduce dependency on SNAP benefits, ARKids and Medicaid, thereby freeing working people of reliance on state programs.
“A living wage benefits the University by boosting employee morale and decreasing turnover. Most importantly, paying a living wage is a moral imperative for a university whose mission is to advance the welfare and prosperity of the state.
“To prevent living wages from increasing the tuition burden for Arkansas students, Local 965 and the undersigned petitioners ask that the university fund these raises through existing revenues, namely a moratorium on salary increases for administrators already earning more than $100,000 annually until these goals are met.”

Speakers at the rally include:

Steve Boss, Ph.D., University of Arkansas professor of geosciences, will host the program.

Local 965 has the website arkansas965.org and accounts on Facebook and Twitter. Local 965 supports University of Arkansas System employees throughout the state and governmental employees in the four Northwest Arkansas counties of Benton, Carroll, Madison and Washington.

Local 965 officials point out that since 2011 the Jane B. Gearhart Full Circle Food Pantry on campus provides emergency food assistance to current students and staff members who request it. This indicates a significant segment of the UA workforce is feeling an unfair economic pinch.

The Local is also calling for graduate teaching and research assistants on 50% appointments to receive at least $15,000 for the academic year. Pierce noted that the University’s recent growth has increased its dependence on these graduate students to fulfill its core missions of teaching and research. Yet many of these vital employees are living in poverty. The University’s own statistics show that over the past year 48 percent of graduate students were food insecure at one point.

“This is local people helping local people, a grassroots effort to promote the well being of the lowest paid staff members and to fight poverty in the region,” Pierce said. “We believe that if there’s $12 million to pay a football coach not to work at the University of Arkansas, the Board of Trustees can find the money to pay all of its workers a living wage.”