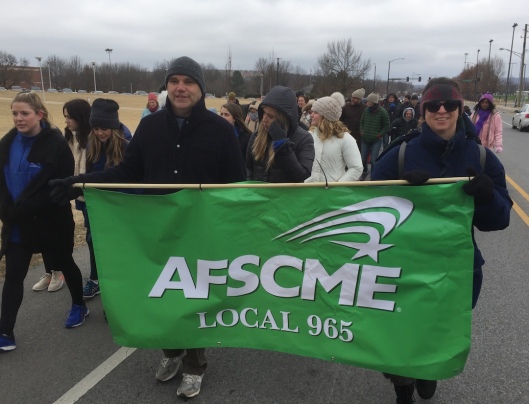 About 400 people braved the cold to commemorate the life of King, the pastor and civil rights leader who was assassinated while leading an AFSCME sanitation workers strike in Memphis in 1968.

The local program was organized by the Northwest Arkansas Dr. Martin Luther King Jr. Council. The march moved along Razorback Road from Martin Luther King Boulevard to the University of Arkansas Union. A vigil with speeches and a performance by the Inspirational Chorale followed in the union. The day ended with the council’s 22nd annual MLK Recommitment Banquet at the Fayetteville Town Center. 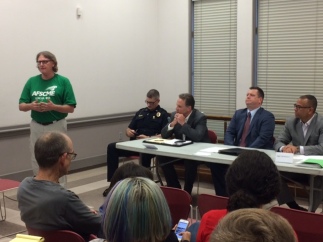 Professor Steve K. Boss of the University of Arkansas Department of Geosciences leads an Aug. 15, 2017, panel on the state’s new law allowing guns on campus. The session was held at St. Paul’s Episcopal Church in Fayetteville. 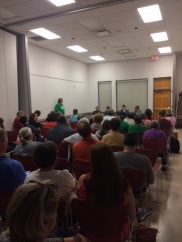 More than 50 people attended the Aug. 15, 2017, panel discussion on Arkansas’ new law allowing concealed weapons to be carried on campuses statewide. The session was held at St. Paul’s Episcopal Church in Fayetteville and featured officials of the University of Arkansas.
A summer panel discussion on a new state law in Arkansas allowed holders of “enhanced” concealed weapon permits to carry weapons on most parts of most college and university campuses was summarized in “Guns-On-Campus Information Session Addresses Safety Concerns” in the campus newspaper Arkansas Traveler. It notes: