Local 965 responded to dozens of queries Aug. 24 at the 2022 Razorbash outside Arkansas Union on Aug. 24, visiting with students, staff and faculty members and a couple of parents of students.

Its table was run by 965 officers as well as AEA President Carol Fleming and AEA UniServ Director Renee Johnson.

Experts to Discuss Impact of Dobbs Ruling on Sept. 6 in Fayetteville

On June 24, a 6-3 Supreme Court vote voided Roe v. Wade. As fall semester begins, we’re uncertain how this further partitioning of health care will impact UA students and employees who use gynecological services available on
campus and elsewhere in the region.

As a free public service, UA-Fayetteville Education Association/Local 965 has invited specialists in law, health care and politics to discuss “The Fight for the Future of Reproductive Health at the University of Arkansas” 6-7:30 p.m. Tuesday, Sept. 6, 2022, now in the Event Center of the Fayetteville Public Library. That’s the new large auditorium. Live-streaming the program is planned, with details announced on the Local’s social media before the event.

The knowledge and analysis from our panel will help the greater community plan and act in the near future.

Professor Jill Wieber Lens is the Robert A. Leflar Professor of Law and Associate Dean for Research & Faculty Development at the University of Arkansas School of Law. She is an expert on reproductive rights and justice, specializing in pregnancy loss, especially stillbirth. Her work has appeared in the Vanderbilt Law Review, Washington University Law Review, Iowa Law Review, and Boston University Law Review. She has also recently published pieces about the intersections of abortion and pregnancy loss in the New York Times, Time magazine and the Arkansas Democrat-Gazette.

Dr. Kathleen Paulson is a board-certified gynecologist and fellow of the American College of Obstetricians and Gynecologists, She earned a Doctor of Medicine at Ohio State University College of Medicine in Columbus then completed her residency in obstetrics and gynecology at University of Missouri-Columbia. She joined the Gyn Clinic of the university’s Pat Walker Health Center, in 2017, having been in private practice in the area previously.

Karen Sebold is an assistant professor of Political Science in Fulbright College. She earned a doctorate in public policy and master’s in political science from the U of A, and bachelor of science from Oklahoma’s Rogers State University.

Local 965 protested Dobbs shortly after its issuance with “Resolution for Bodily Autonomy,” which concludes:

The ruling, concurring and dissenting opinions, and related essays can be found in the Dobbs section of SCOTUSblog.

Media queries should be directed to Local 965 President Bret Schulte in care of Local 965. Schulte is an associate professor of journalism in Fulbright College’s School of Journalism and Strategic Media, whose reportage has been nationally published.

This report first was published in the July 2022 newsletter of UA-Fayetteville Education Association / Local 965.

Lots of us this summer have had to consider both mass shootings and reproductive rights. I ended up diving headfirst into both over July 4 in Chicago.

When the Local 965 officers asked for volunteers this spring to represent the union at the annual National Education Association convention, I expected serious intensity and not enough free time (as that’s how conferences usually go) but not four 12-hour days of debates and electronic votes among nearly 6,000 colleagues.

Nor did I expect the honor of being the first University of Arkansas representative and the first higher-education delegate for the whole state at the NEA Representative Assembly, the convention’s official name.

Gun violence topped the July 3-6 agenda even before the Fourth of July mass shooting in suburban Highland Park — 30 miles from the gathering. RA delegates were told not to leave the McCormick Place hall in the hours the suspect was at large.

The first resolution, including a budget to fund it, begins:

“The NEA shall issue a National Call to Action to ensure that all students, educators, schools, campuses and communities are safe from gun violence.”

The measure, passed overwhelmingly, authorizes nearly a half-million union dollars to execute the call’s seven points, which are detailed along with the other approved New Business Items in the last issue of its daily convention newsletter RA Today (PDF).

Masking and social distancing were enforced at Chicago’s McCormick Place as well as during state caucuses held in delegates’ hotel meeting rooms before the RA convened daily. Covid-19 was such a concern the NEA staff continuously screened at the entrances everyone attending with a mobile phone app that green-lit completed vaccination records and negative, recent test results.

At the first Arkansas caucus July 2, I was elected its secretary. It was like being jury foreman in that no one knew me yet seemed a reasonable choice. I took minutes starting at 6:30 a.m. for the coordinating committee then the caucus at 7:30. We were bused to McCormick Place around 9 a.m., returning after 7 p.m.

While there was token parliamentary opposition to finding ways to promote and lobby about gun controls, a vocal minority made points about abortion, chiefly why is the public educators’ union stepping there and whether a pro-abortion stand is worth some member resignations.

Yet New Business Item 34’s two votes were 74 percent and 76 percent in favor:

“NEA will publicly stand in defense of abortion and reproductive rights and encourage members to participate in activities including rallies and demonstrations, lobbying and political campaigns, educational events, and other actions to support the right to abortion, contraception, and a person’s decision about their health.” The cost for its promotion beyond the already set NEA budget is just $4,500.

The assembly adopted, with minimal opposition, three measures that variously supported expansion of and opposed restrictions to LGBTQ+ rights.

For me, the 2022 RA with some dozen and a half miked lecterns throughout the audience (the hangar-like McCormick felt like the wings of two 747s wouldn’t touch) provided almost surreal observations of real mass democracy in strict parliamentary practice, noisy and orderly, exhausting but riveting. In queue two-plus hours for Secret Service body and bag searches July 5, when Vice President Kamala Harris spoke, became part of the spectacle.

All was comprehensively reported July 7, 2022, in Education Week at “Abortion, Anti-LGBTQ Bills, and Safe Schools: 5 Things to Know From NEA’s Annual Assembly” by Madeline Will, who noted in apparent response to Fox News comments, “This year Education Week was the only news outlet covering the entirety of the assembly.”

The UA-Fayetteville Education Association/Local 965 stands in support of women’s bodily autonomy, right to privacy, equality under the law and unfettered reproductive choice. The Supreme Court’s June 24, 2022, decision Dobbs v. Jackson Women’s Health Organization that overturns its 1973 Roe v. Wade ruling has destabilized not just our legal system but the society it governs by demonstrating its frightening, politically motivated disregard for the freedom of an entire class of people.

Local 965 supports full human rights, including abortion access, as outlined in the Universal Declaration of Human Rights. As the union of University of Arkansas employees at all levels and stations, Local 965 is particularly concerned about health care access for women on campus.

Local 965 calls on the University of Arkansas to take whatever steps possible to protect the reproductive health needs of students, staff and faculty — including but not limited to:

The Local 965 Executive Board approved this resolution 8-0 by email discussion.

Arkansas Abortion Support Network is “an all-volunteer, nonprofit, 501(c)(3) organization whose mission is to reduce barriers to abortion access in Arkansas” It uses ActBlue for online donations.

Planned Parenthood accepts general donations online or you can click on its “Specific Giving” tab to select Arkansas/Great Plains region, with centers in Rogers and Little Rock. 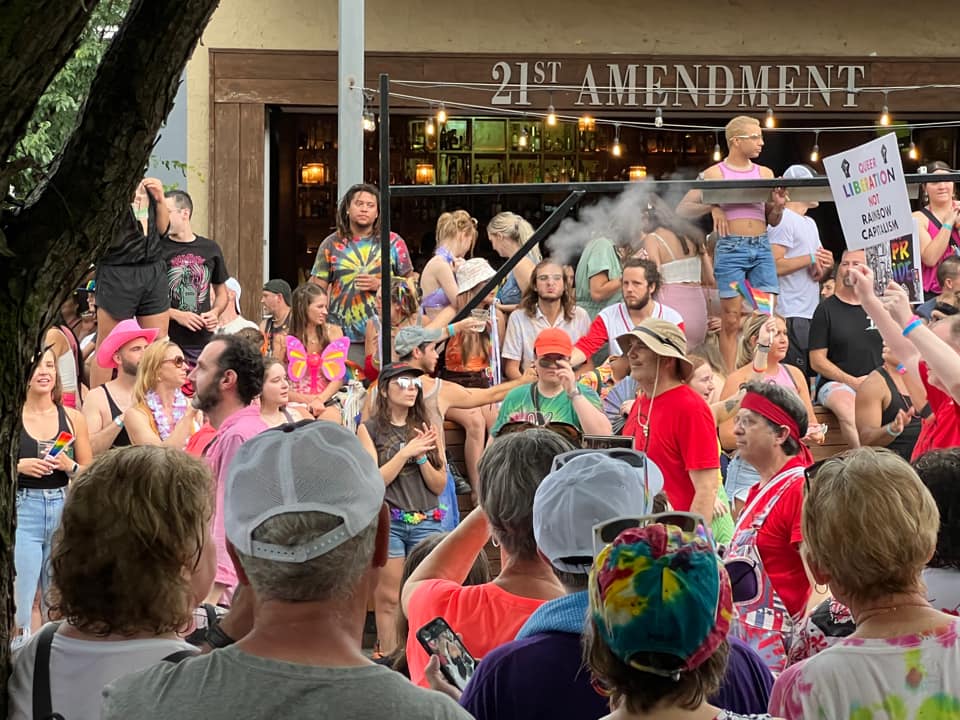 Sudden Showers Slowed Neither the Pace nor the Enthusiasm

The labor organization of the University of Arkansas again participated in the area’s Pride events, the 2nd annual Trans March and 18th annual Pride Parade, June 18, 2022. The crowd easily numbered in the thousands.

The day’s small chance for rain turned to 100 percent 45 minutes before the Parade’s 5 p.m. start. The steady shower slowed for most of the event — flowing west along the whole commercial section of Dickson Street — then drenched onlookers and participants as the rally ended at the foot of the campus.

The PRIDE registered student organization hosted several UA groups including UA-Fayetteville Education Association/Local 965, marching as one unit among other entities, proficiently overseen by Northwest Arkansas Equality with assistance by the city of Fayetteville and law enforcement.

Holding the 965 banner were the local’s vice president, Mike Pierce, and secretary, Ben Pollock, joined by board member Chad Kieffer as well as member Trish Starks.

Kieffer and Gliszinksi represented Local 965 for the noon Trans March, the second annual.

While individual members of UA-Fayetteville Education Association / Local 965 have participated individually in years past, the union participated as an entity in 2021 and now. The event is organized where various University of Arkansas groups participate as its own unit, organized by the registered student organization UARK PRIDE, celebrating its 40th anniversary. The daylong Pride Festival including the march and parade were proficiently overseen by Northwest Arkansas Equality with assistance by the city of Fayetteville and law enforcement.